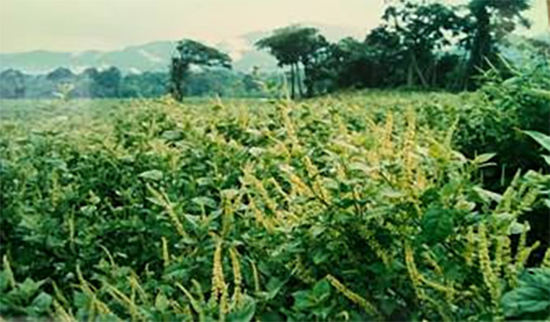 Sheikh Mohammed, who also owns a gigantic agricultural farm – Ethio Agri-CEFT PLC – in Ethiopia, has so far invested over 5 million Ethiopian Birr (close to USD 170,000) for the research effort and to develop it on 50 hectares as a commercial plant over the last ten years aiming at curtailing application of synthetic pesticides or chemicals.

Consequently, flower farms in that country are replacing synthetic pesticides with the trailing shrub – Phytolacca dodecandra L’Herit – as researches confirm the fungicidal and larvicidal properties of the plant, says Mr. Esayas Kebede, General Manager of the commercial farm.

Researchers working for Ethio Agri-CEFT, one of the largest commercial farms in Ethiopia, have been conducting the bio-pesticide plant’s field trials as a fungicidal agent on two flower farms in Holeta and Bahir Dar towns and proved that Phytolacca dodecandra (locally called ‘Endod’) could be an “alternative to manufactured pesticides.”

Adane Wolde-Yohannes, Ethio Agri-CEFT Deputy General Manager for Agriculture and Agro-Industry stated: “These promising results mean that the plant can have widespread use in both domestic and industrial settings.  The trials at our Holeta and Bahir Dar flower  farms were  so  successful  that  we  were  able  to  reduce  the  use of manufactured pesticides.”

“Ethio Agri- CEFT has been conducting observational studies on the ‘Endod’ plant for more than ten years.  The data collected from these studies indicates that the plant has fungicidal, larvicidal and molluscicidal properties,” Adane Wolde-Yohannes indicated.