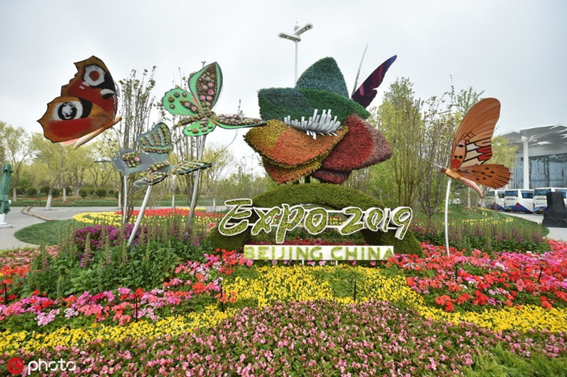 Ethiopia’s floriculture and coffee commodities are currently being showcased at the Beijing International Horticulture Expo 2019 which is being held in Yanqing District of Beijing, China. The Beijing Expo 2019 aims to create a new horizon for world horticulture and new model of ecological civilization. Being held in a huge park of over 500 hectares, at the foot of the world famous Great Wall of China, Beijing Expo 2019 is the world’s largest horticultural show. During its six-month run, the Beijing Expo is expected to attract 16 million visitors from all over the world. Over 110 countries, including Ethiopia, are exhibiting floricultural and horticultural products and promoting their tourism attractions and cultural heritage.

Officially inaugurated on April 28, 2019 in a ceremony attended by leaders of various countries including President Xi Jinping of the People’s Republic of China, the Expo was timed to open at the end of the second Belt and Road summit. In his opening address, President Xi emphasized the importance of green development and ecological civilization through the development of horticulture industry. The Ethiopian delegation was led by Minister of Agriculture, Oumer Hussien.

Ethiopia is exhibiting its flowers and coffee as well as its extensive networks of tourist attractions to the Chinese public and to the world. Commenting on the exuberant mood of visitors of Ethiopian pavilion, Ethiopian Ambassador to China, Ambassador Teshome Toga, said that “the platform unfolds a new prospect and vitality for Ethiopia’s horticultural commodities and tourist attractions to penetrate the huge China’s market.” He added that the theme of the Expo, “Live Green, Live Better”, closely aligned with Ethiopia’s own Climate Resilient Green Economy strategy. In an interview given to the People’s Daily, Minister Oumer Hussien said “President Xi’s speech was inspirational in the sense that creating a harmonious relationship between humankind and nature is a necessity and commonly shared by all countries, and we need to treat nature in a sustainable manner to ensure the future of the next generation.”

Ethiopian horticultural development for the export of flowers, fruit and vegetables, favoured by the country’s suitable climate, has been one of its major success stories of recent years. The sector has attracted a huge investment flow and had been steadily penetrating international markets over the last two decades. Mainly driven by the expanding middle classes’ strong level of consumer confidence, backed by a younger generation who see cut flowers as part of daily life, China is becoming the largest potential marketplace of horticultural products. Expo 2019 marks a new chapter and will help to open doors for Ethiopian horticulture producers and exporters to translate their global market successes into action on China as well.

Ethiopia’s theme for Expo 2019 is “13 Months of Green Production”, portraying a picture of sustainable, harmonious and eco-friendly horticulture, produced all the year round. During the first week of the Expo, the Ethiopian pavilion caught the eyes of more than 7,000 visitors who were impressed by the colourful flowers on display and the traditional coffee ceremony. Over the next months, Ethiopia will now be organizing a series of colourful cultural performances in China to add a further dimension to the cultural and other attractions on display.

Beijing International Horticulture Expo 2019, the world’s premium horticultural exhibition, is approved by International Association of Horticultural Producers and held under the auspices of International Bureau of Exhibitions, with the support of the Government of China. Ethiopia’s participation in this Expo is being overseen by a National Steering Committee composed of various government and private entities, and State Minister of Agriculture, Aynalem Nigusie, nominated as a Commissioner-General for Ethiopia’s Pavilion. A delegation of Ethiopian commercial horticultural farmers, led by Zelalem Mesele, the President of the Ethiopian Horticulture Producer Exporters Association, also attended the Expo. (Distributed by APO Group on behalf of Embassy of the Federal Democratic Republic of Ethiopia, London, UK).