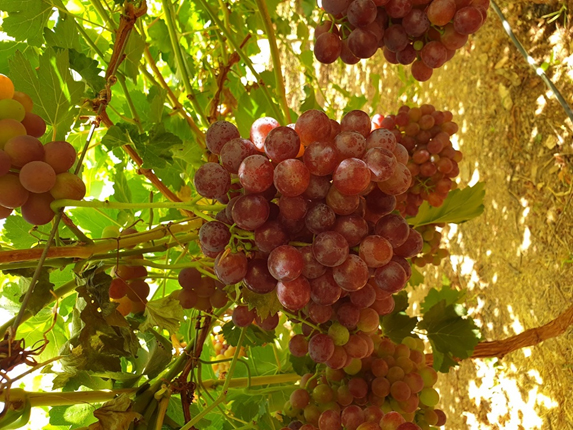 Conditions in the European grape market are currently much improved compared to the same period last year, according to a Netherlands-based supplier.

He said the company began receiving the first Brazilian fruit during October. Brazilian grapes started shipping later than last year in order to face less competition with European fruit. Nevertheless, the overseas grape market only started opening up just a few weeks ago.

“However, I think we can say the conditions are the contrary to last year," he said. “Last year we were under pressure and we had an oversupply of pretty much all grape crops, with the exception of Chile."

Origin Fruit Direct is now setting up the Namibian and South African shipments, with the first fruit from its Orange River farm packed last week.

Grape from Peru – which is growing rapidly and extending its season on both ends – have arrived earlier than in 2018. Van Melle said this could be to avoid a repeat of last year when a clash between Peru and South Africa led to “terribly low prices".

Another difference from last year is that the U.S. market will be attractive for Peru much earlier, with California supplies now winding down.

In addition, he said that many South African exporters are attempting to diversify their markets wherever they can in order to avoid over-reliance on Europe.

Prices ‘healthy’ but will decline over coming weeks

For now, Van Melle said that the fruit is arriving in the market but at more reduced levels than normal.

Availability remains low of white seedless grapes, which he said are fetching “healthy" prices of around €17 – €17.50 FOT per 5-kilogram carton. That price is slightly above red seedless grapes, but there is also good demand on that category, he said.

One new dynamic this season is that a retailer in Germany – typically a high-paying grape market – has set its prices considerably lower this year at just €12.00 per carton CIF, a level that is only just above cost prices for South African grapes, but definitely under cost prices for the Brazilians.

The decision is having knock-on effects, with other German buyers also trying to pay lower prices. The move has also likely limited average European pricing during the start of the import season, he said.

“Some people are getting nervous. We always get a big wave of fruit before or after Christmas, and surely prices will come down again this year as well. The question is how much and how hard," he said.

“I foresee a good scenario. My personal expectations are that we should end up on €12 – €13 in January, it might be possible to reach €14. On the other hand, if other importers are agreeing €11 or €12, that will put things under pressure again. If there was only a way to keep all our backs straight that would keep prices good and healthy."

Van Melle expects a “decent" season out of South Africa this year, with regular volumes. He said the initial supplies have been lighter than expected but would increase significantly from January onwards.

White seedless grape supplies could be in short supply by February, in part as India’s season is running a few weeks later due to the Monsoon rains continuing for longer than normal and delaying pruning. The country’s fruit would normally arrive from around week 7 or 8 but it could be as late as week 10 or 11 this season.

“That will create shortage on white seedless, but on red seedless things are still looking fine with South Africa," he said.

However, he expected that Chilean grape exports to Europe – which are mainly red seedless – would be impacted by the severe drought in growing regions.

“We’re trying to make an inventory of our suppliers in Chile who can produce a normal crop. Some are reasonably okay and some not okay," he said. Chile supplies most of Origin Fruit Direct’s red seedless volumes from around weeks 14 – 16 onward until the Egyptian season begins. “So there could be some shortage on the red seedless," he said.