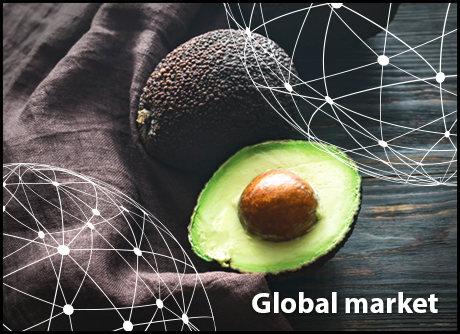 The avocado market has changed a lot in Europe. While it is normally quieter in the summer, this is not the case now due to a shortage of the fruit. The lack of avocados on the European market is a consequence of the situation in the United States. Due to the favourable prices, a lot of the exports from Peru and Mexico are going to the US instead of to Europe. Currently, Peru, Mexico and South Africa are the countries in production. Colombia is also producing, but it has smaller volumes which are primarily intended for the domestic market and Europe. The production in Chile is expected to arrive in a month.

Peru is currently the largest exporter of avocados in South America, even though the country's volume is smaller than last year's. The total volume has fallen from 351,000 tons to an expected 305,000 tons. This is mainly due to the record figures achieved in 2018 and the fact that avocado trees can yield more one year and less in the following year (Alternate bearing). 27-30% of the production is intended for export to the United States, while 55-57% goes to Europe, 9% to Asia and the rest goes to South America and Canada. The harvest in Peru lasts until the end of September / beginning of October. An important development in avocado cultivation in Peru is the extension of the season through new technology and new plantations in the north of the country. Thanks to those new areas in the north, the season started a month earlier this year.

Last week, the price for Mexican avocados stood at 650 pesos ($ 33.80) per 10 kilo box; a record price. This price increase is due to a lower yield of avocados, which has been driving up prices since the end of April. At the end of July, the supply and the demand are expected to be in balance again. The Association of Avocado Growers in Mexico expects more than 1 million tons of avocados to be exported to the US in the 2019/2020 season; an increase of 5.23% compared to the previous campaign. 188,513 tons of avocados will be available for export to other markets.

Chile: Not yet in production

It will take another two to four weeks for the Chilean avocado season to start. There is a good chance that the country will first focus on exporting avocados to the United States. This is due to the favorable prices there. Exports to Europe will start after that.

Kenya's avocado production has been reduced by the weather. This has mainly had an impact on the Fuerte variety. It has actually been the worst season ever for this variety.The prospect is that things will go better in the next season. For a given trader, the export of avocados has fallen by 20%.

The most important development on the export market of Kenyan avocados is the future trade agreement with China. As soon as this agreement is fully active, 40% of the avocados are expected to go to the Chinese market. Currently, Kenyan avocados are mainly intended for Europe and the United States.
In 2017, Kenya accounted for 38.9% of Africa's total avocado exports and for 1.3% of the fruit's global trade.
.

South Africa: A supplier for the European market

South African avocado growers had to reduce their production estimates down to 14.5 million 4 kilo boxes. That is a million less than originally expected and 30% less than last year's record harvest. The prices are good; around € 14-15 / 4 kg for the Hass. The most important destination for South African avocados is Europe. At the moment, some buyers want avocados flown in from South Africa, which is very unusual for the time of the year. The prices are high due to the situation on the world market. The good prices paid for South African avocados on the European market will likely remain stable until the season kicks off in Chile, followed by Spain and Israel.

The Netherlands: Avocado market changing completely in one and a half months

Although the avocado market is usually a bit slower in the summer, this is not the case this year. Dutch importers say that the market has completely changed in a month and a half. The main reason is that Mexico has been supplying fewer avocados than expected and the United States has been attracting a lot of traders with its good prices. Almost all Mexican avocados are now going directly to the United States. What remains is the production from Peru, Colombia and South Africa, supplemented with some small shipments from Kenya, but Colombia is in the off-season and South Africa also has a smaller production. In May, there was a big price dip in Europe, so marketers there have been somewhat cautious with the volumes. In the meantime, not enough avocados are available to meet the demand. Importers expect this situation to continue until mid-August, when more countries will come into production.

Belgium: Avocados sold before they reach the market

Too few avocados are currently on the market in Belgium. An importer says that the few avocados available are sold even before he has received them. There is simply too little available to meet the market demand and the prices are therefore high.

The German avocado market is currently at an impasse: Until recently, there was enough available to meet the demand, but the situation has changed in recent weeks. “At the moment, there is hardly any volume available and we have to be happy with every batch that comes in,” reports an importer from Hamburg. The prices are therefore extremely high and fluctuate around 20 Euro per 4 kg package. The main supplier of summer avocados is currently Peru, supplemented with some small volumes from Kenya and other countries. Partly due to the shortage on the market, there is currently no demand for alternative varieties and only the Hass is being sold.

France: Prices will not fall until November

In general, the season has been completely different to last year's. This time, the Peruvian production volume has fallen by 12%. California has grown little, so the US market is demanding a lot from production countries in Latin America with high prices. This is resulting in fewer avocados being shipped to the European market. The prices are therefore high and amount to around € 15-17 / 4 kg in France. Prices will only fall around November with the arrival of Spanish and Israeli avocados. The demand is still growing, especially for the Hass, while the “greenskins” are not as popular.

At the end of May, the yield from the avocado harvest in Spain was 55,000 tons, with prices at origin oscillating between € 2.50 and € 3 per kilo. The crop's cultivation is expanding in Spain, just like in the rest of the world, and the demand for avocados continues to grow. Spain currently has more than 15,000 hectares devoted to avocados, half of which are in Malaga; however, it is difficult for avocado cultivation to expand in this region due to water management, so new areas are being planted in other regions, such as Huelva, Cadiz, Valencia, Alicante and also Portugal. The consumption of avocados in Spain is lower than in other countries (1 kilo per capita). It is about 50% lower than in France and the UK and three times lower than in Scandinavia. The sector is trying to stimulate avocado consumption in Spain in order to reach France's level. A good harvest is expected next year, with a 10% higher volume compared to this season.

South African and South American avocados are currently being sold on the Italian wholesale market. The avocado season has just ended in Sicily with positive results. The demand for avocados has recently fallen somewhat in favor of summer fruits, but when looking at the entire year, the figures show an upward trend. The demand is currently higher than the supply.

Sicilian avocado cultivation is not yet in full production and this year it is at 50% of its capacity. This season, 700,000 tons of avocados were grown, mainly Hass, but also Fuerte, to a lesser extent. The sizes of the Italian fruits are average. The new season is currently delayed by a month due to the cold spring.

Avocados are gaining popularity in the Chinese market, especially among the younger generations, as young people have more health-oriented lifestyles and avocados are a nutrient-rich fruit. Older generations will need a little longer to get used to consuming avocados.

China is fast becoming a local producer of the fruit, even though the country still largely relies on imports from Mexico, Peru and Chile. The price fell sharply in May because companies were importing large volumes from Chile at the same time. Last year in May, the price was right, and that attracted many investors for this year, so there has been too much supply in a short time. Currently, the price is going up again. The import season of Peruvian avocados is almost over and the Mexican avocados are arriving in small numbers. This naturally pushes up the price, which is now even higher than in the same period last year.

The demand for avocados in Japan is steadily increasing and has grown to 74,000 tons in the last five years. Japan does not grow avocados itself, so the market depends on imports from the United States, Mexico, New Zealand, Vietnam, Peru and Chile. The country is currently negotiating with Indonesia in order to also have import avocados from that country. The requirements that Japan imposes on the import of fresh fruit and vegetables are strict; however, for the export in avocados, the rules are not so strict, due to the country's demand.

Besides California, the US imports avocados from Mexico and Peru. The price of Mexican avocados has risen sharply, and due to price developments on the US market, Peru has shipped a large part of its production to the US, instead of Europe. The old Mexican harvest is ending in 2 weeks and the “Flora Loca” harvest started on July 1. Mexican growers are not used to the high prices currently paid for avocados (100 Pesos / kg, instead of the 20-30 Pesos / kilo that used to be paid). When California and Peru are out of production, a strong price increase is expected again. This will take place between August and September, when most avocados will come from Mexico.