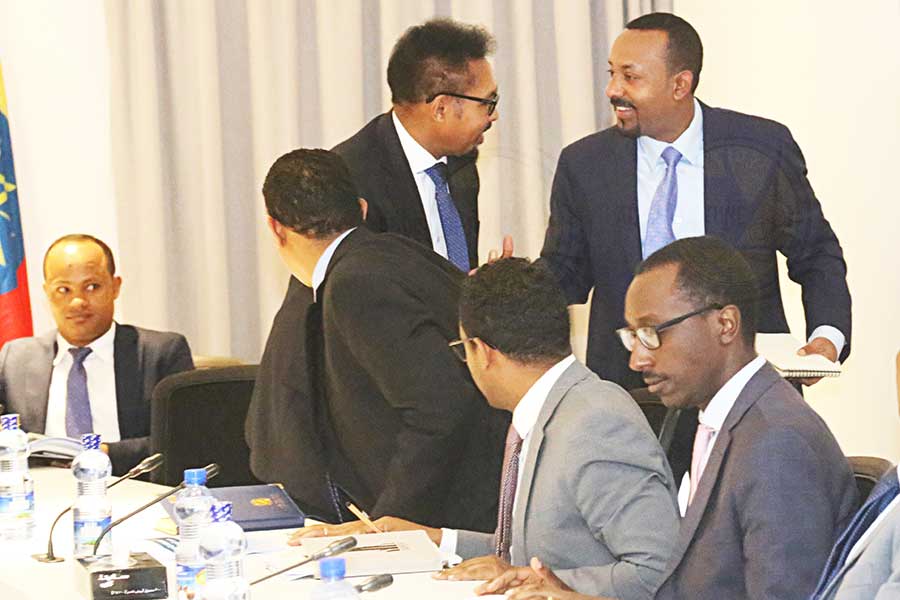 To be chaired by Prime Minister Abiy, the steering committee will have high-level government officials and regional state heads as members and is expected to be operational in the coming weeks. A representative from the Ethiopian Investment Commission will be the secretariat of the new committee.

Six months ago, the Office of the Prime Minister formed the National Ease of Doing Business Steering Committee in a bid to relax the regulations involved in running businesses in the country to make it more suitable for investment. It also aims at bringing informal businesses on board the formal system.

The National Ease of Doing Business Committee has representatives from eight ministries and agencies including the Investment Commission; the ministries of Finance, Innovation & Technology and Trade & Industry; the National Bank of Ethiopia; and the offices of the Prime Minister and Attorney General, among others.

Prime Minister Abiy Ahmed (PhD) has formed a new national steering committee to oversee and reform the investment climate and employment regime. The initiative also envisions placing Ethiopia among the top 100 countries in the Ease of Doing Business Index by 2021. The World Bank’s 2019 Ease of Doing Business Index places Ethiopia at the rank of 159 among 190 countries.

The Investment Commission is the coordinator of the reforms, while the Office of the Prime Minister is the initiator. The other government institutions will implement the reforms by forming task forces.

Since becoming functional, the Committee managed to recommend the reform of eight proclamations and regulations along with 40 procedural and administrative legal frameworks.

The registry of a movable asset as collateral for credits, a value-added tax refund system and the registry of microfinance institutions and leasing companies into the National Bank of Ethiopia credit system are among the laws that followed the reform. The mandatory requirement to obtain a business license, which includes newspaper publication of trade names and lease or rental agreements, was also lifted.

Introduction of an electronic single window system, issuance of an online construction permit and tax payment through banks were also introduced as part of the reforms over the past couple of months. In the past six months, the government has digitised title deed records in Addis Abeba and added commercial benches at the Federal High Court as part of the reforms.

Though all of the reforms were reported to the World Bank, the upcoming Ease of Doing Business Index to be released in October will not consider most of them, since the Bank counts reports until the end of last April, according to Abebe Abebayehu, commissioner of the Ethiopian Investment Commission. “Most of the reforms were implemented after April," said Abebe.

“The performances of this year enable us to conduct impact outcome studies of the reforms," said Prime Minister Abiy, adding that the outcome of the reforms would attract more investment that could help create three million jobs. “Therefore, we’ll upgrade our focus to employment and investment."

Zereyaqob Belete, the managing partner of Nexus Investment Solution, a decade-old investment consultancy firm, says the undergoing reforms will have a significant impact in attracting more FDI from Western countries. “The reform will break the bureaucratic chains and reduce the level of corruption," said Zereyaqob, “which will end up cutting the unforeseen expenses of the investors, encouraging them to invest in Ethiopia."

Zereyaqob also suggests the government give attention to the stability and security of the country, another major factor for the improvement of the investment climate.